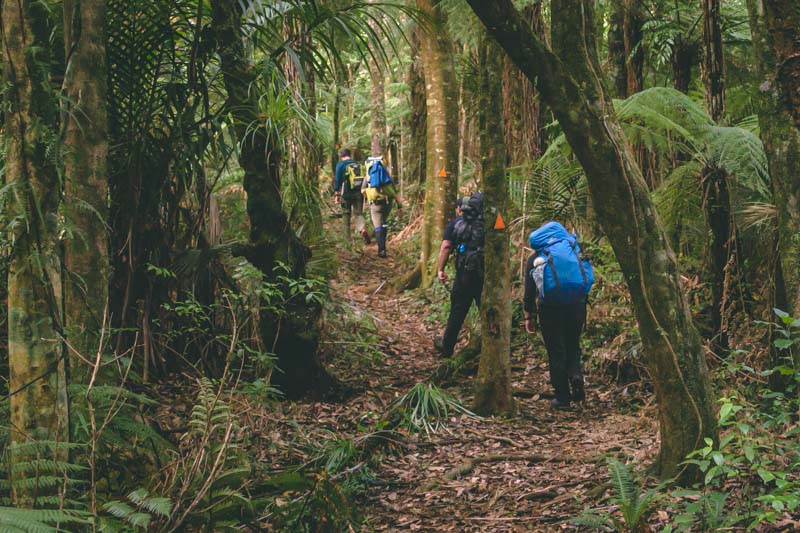 Walk in the woods - Mt Pirongia

Some in the group called it character building, others jokingly said it was soul-destroying, but this loop track around Mt. Pirongia is well worth the muddy effort.

And one of the great things about Pirongia is how accessible it is from Auckland - and for anyone looking for a day hike or an overnight expedition, the start of the hike at Kaniwhaniwha car park is a mere 1.47 hrs away.

We had already summited Mt. Pirongia via Corcoran road last Summer, (up and down in approx 5-6 hrs) but for a winter hike during Queen's birthday weekend, we wanted to do a slightly longer route and experience the joys of hut life.

Anticipating an onslaught of traffic for the long weekend, and wanting to grab spots in Pahautea hut on the off chance it would be full, we left Auckland bright and early at 7AM.

Once at Kaniwhaniwha car park, cross the road to the start of the track. The first section is the Nikau walk (2.7 KM), which quickly joins the Tahuanui Track (9.1 KM).

I think the beginning is deceptively easy, with the gradient building gradually. As we got deeper into the forest, the route quickly became steeper, to join onto the Tirohanga track, finally summiting Mt. Pirongia after around 4 hours (4 hours and ten minutes to be exact). Our overall distance covered on Day was 13.8km.

We've done a few overnight hikes before, including the Routeburn Track and the Abel Tasman Coast Track, but the extra weight of the packs made the steep sections hard work and we could definitely feel the glutes firing! Safe to say we earned all the snacks we'd packed.

About a third of the way up we bumped into a man who looked rather lost. One of his dogs had run off into the bush, and his companions had left him there to mind the other dog while they went looking for the missing one. It was a beauty!

We'd almost forgotten about the encounter until we saw a dog in the bush, an hour or so later - but there was no way to contact the man. Hopefully all has been since resolved!

Just as we were joking that the track was too easy, the incline increased and seemed to stay that way until the summit.

It was a bit of a relief to see the sign saying we had only 15 minutes to go until the top. We layered up and climbed the ladder to the viewpoint. Nice views of the Waikato region, farmland

Another 30 mins of plodding brought us to Pahautea hut, where we happily shed our packs and went inside to score spots to sleep.

Pahautea hut is a backcountry hut which works off a first come first serve basis, and kind of honesty system for payment. It's only $5/per night for adults which is pretty amazing considering how modern and spacious it is! You can grab the blue DOC tickets from several retailers around the country (we got ours from Bivouac Outdoor and Living Simply) and once you buy them, there doesn't seem to be an expiry date.

It was pretty early when we got to the hut (around 3pm) so we were pleasantly surprised to see quite a few others keen hikers there already. Given the poor weather forecast and the relative “out of the wayness” of the hut, we didn't think many people would climb the mountain - which ironically was the same reasoning everyone else had employed! Funnily enough, by 6PM the hut was at capacity.

There was still a great vibe, with everyone welcoming latecomers, sitting around the communal tables playing cards and just chillin'. Thoughtful additions like a washing station for shoes, candle holders inside, magazines and decks of cards made everything a little more cozy!

Most of us were in bed by 8PM, ready to do it all over again the next day.

Maybe it's the distance that's off-putting to people or the track just isn't that well known, but much of it is overgrown, hidden, and completely devoid of people. (In fact we only saw one other person the whole day!)

But all of that adds to its charm, and it's really like something out of Jungle Book - half the time we were brushing vines aside, dodging mud puddles, thick, pungent muck, crawling over and under trees, leaping over roots and side-stepping rocks. We only saw one other soul during our whole day.

There's also a LOT of mud. We tried side-stepping it initially, but by the halfway mark we were happily plodding right through it, knowing it was a lost cause - getting muddy was a definite! Apparently the reason there's so much mud is that the mountain doesn't have a draining system.

Shortly after leaving Pahautea hut we will climb the second highest peak in Pirongia (the Cone) before descending the ridge through a few clearings. We crossed a swing bridge, dropped our packs and made a mad dash/friendly race to the tallest native tree, before joining the rest of the group.

Unfortunately we were all pretty knackered by the time it came around to the Kaniwhaniwha caves, so we didn't explore them, but we know there's something for next time.

This article originally appeared on Break the Resistance, written by Mallika Goel and Barry O'Reilly. They celebrate adventure and exploration through writing, film and photography, inspiring people to be active, go beyond their comfort zones and ultimately break the resistance!