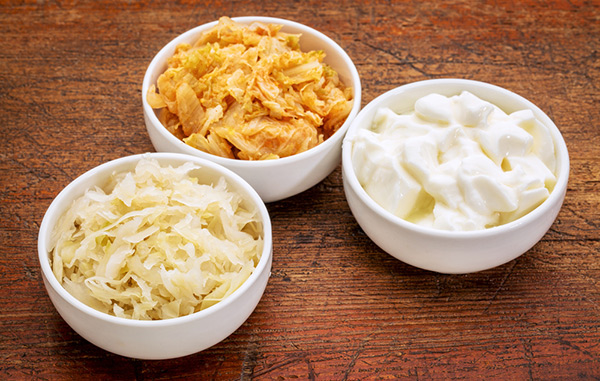 Fermenting food began as a way to preserve it, but these days we hear a lot about the practice because of the potential benefits for our gut health. Most vegetables and some fruits can be preserved, using either a salty brine, the vegetables' own juice, whey or a starter culture. You can also ferment dairy, nuts and grains.

During the fermentation process, the bacteria that make food go off are inhibited and alcohols or acids (like lactic acid) are produced from the food's natural sugars and starches. That preserves the food.

Why add them to your diet?

Several benefits are associated with eating fermented foods. One is the introduction of ‘good bacteria' to our microbiome, the body of bacteria that lives in our gut. Gut microbes give our digestive health a boost, assisting us to use unabsorbed carbohydrates and turning them into a source of nutrition and energy, and helping with the absorption of some minerals.

According to an article from the Nutrition Science and Policy School at Tufts University in the US, the probiotic like bacteria found in fermented food help ‘pre-digest certain components of the food we eat, making the nutrients more readily absorbed.

Fermenting foods can also increase the vitamin content. According to a document produced by the UN's Food and Agriculture Organisation, some fermented food can contain higher levels of thiamine (vitamin B1), riA document boflavin (B2), and niacin (B3).

The gut accounts for a large proportion of our immune system - a member of the team at Britain's Dietetic Association told the Daily Mail that between 70 and 80% of our immune cells are in the gut. She added that fermented foods stimulate bacteria that benefit the immune system, so can be good for combating symptoms of cold, or help control the symptoms of digestive issues like irritable bowel or bloating.

Researchers are also investigating whether fermented foods assist with weight management. A South Korean clinical trial showed that the country's traditional dish kimchi (fermented cabbage) is more beneficial for metabolism and immunity than its non-fermented counterpart.

Which fermented food can you try?

Many fermented foods are growing in popularity, and several aren't difficult to ferment at home.

Among the choices are pickled vegetables like kimchi and sauerkraut (cabbage), and dill pickles, which can be made using lactic acid fermentation. There is also kefir — a fermented milk drink - yoghurt, and kombucha, a cold fizzy drink made from sweetened black tea that's fermented with yeast and bacteria. You could also try fermenting soybeans to make miso or tempeh.

There are so many recipes online for fermented food, and here are just three you might like to start with:

Share via:
Tags: nutrition
Previous article Rhubarb and Orange Frangipa... Next article The Mindfulness of Craftivism