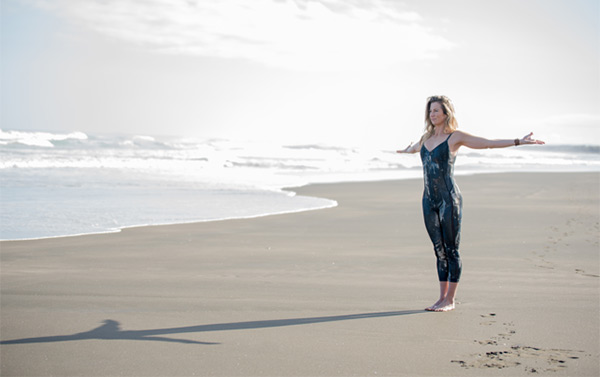 Don't be fooled by pictures of fancy yoga poses. The true practice of yoga begins with the desire to live a more peaceful existence, yet this is rarely the reason that will first bring you onto the mat. As a beginner you may be completely unaware of the thing that brings students back to the mat time and time again, which is the connection of breath, mind, body and spirit. As a beginner all I knew was that I felt, lighter, taller and ‘more like myself' after a class.

Yoga is a doorway to a state of harmony that often gets lost amongst the constant buzzing of our phones, replying to emails and getting caught up in the busyness of life.

Why do people keep coming back to yoga?

Most people first come to yoga to get more flexible, or to be thinner or move better, of even get dragged along to class by a friend or partner. Some pursue yoga for the many health benefits, injury prevention or healing from injury or disease. Few people are even drawn to yoga to help find more calm and clarity and to answer some of the confusion and chaos in their lives, but what keeps all of them coming back is essentially the same.

A commitment to the sometimes challenging path of yoga brings us back home to ourselves and leads the way into happiness, bliss and contentment. One important factor in a student's journey into this inner realm is the guidance they receive during their first year. Like a toddler, the beginner's mind and heart are open, trusting in the information and guidance they receive. There is a huge responsibility on the teacher to lead the student with integrity, humility, wisdom and compassion. This precious first stage will often determine whether a student will continue on the path of yoga for its deeper psychological and spiritual benefits or be thrown out when the new fitness trend emerges.

Crucial points for a beginner yogi

How do I know which yoga style to choose?

In a world where we are spoiled for choice, yoga is no exception. The large variety of yoga to choose from can be confusing and overwhelming. Here are some main styles to help you find whats right for you. If you are beginning, try out a few different styles of classes and look out for a great teacher perhaps being more important than style.

By definition, hatha is a physical yoga practice, which is pretty much all yoga you'll find in this hemisphere. One of the six original branches of yoga, hatha encompasses nearly all types of modern yoga. In other words, hatha is the ice cream if styles like ashtanga and Bikram are vanilla and chocolate chip. Today, classes described as hatha on studio schedules are typically a basic and classical approach to yogic breathing exercises and postures.

This is a purist yoga named after founder B.K.S. Iyengar. Props like blocks, straps, harnesses, and incline boards are used to get you more perfectly into positions and have earned the style its nickname ‘furniture yoga'. Appropriate for all ages and abilities, Iyengar yoga is all about precise alignment and deliberate sequencing. Don't take that to mean easy.

Six established and strenuous pose sequences — the primary series, second series, third series, and so on — practiced sequentially as progress is made. Ashtangis move rapidly, flowing from one pose to the next with each inhale and exhale. Each series of poses linked by the breath this way is called a vinyasa.

This is an active and athletic style of yoga adapted from the traditional ashtanga system in the late 1980s to appeal to aerobic-crazed Westerners. After having studied with Pattabhi Jois, Beryl Bender Birch and Bryan Kest simultaneously pioneered this westernised ashtanga on the East and West coasts, respectively. Power yoga doesn't stick to the same sequence of poses each time like ashtanga does, so the style varies depending on the teacher. Classes called vinyasa or flow in your gym or studio can be vastly different but in general stem from this movement and from ashtanga as well.

A quiet, meditative yoga practice, also called taoist yoga. Yin focuses on lengthening connective tissues and is meant to complement yang yoga—your muscle-forming ashtanga, Iyengar, Power Vinyasa and others. Yin poses are passive, meaning you're supposed to relax muscles and let gravity do the work. And they're long — you'll practice patience here too.

A physical, limit-pushing practice that reintegrates yoga's traditional spiritual elements in an educational way for Western practitioners. Expect a theme for each class, Sanskrit chanting, and references to ancient scripture. Created by Sharon Gannon and David Life in 1984 in New York City, jivamukti translates to ‘liberation while living'.

Bikram features yoga poses in a sauna-like room. The heat is cranked up to nearly 40 degrees and 40 percent humidity in official Bikram classes. If it's called Bikram (for inventor Bikram Choudhury), it will be a series of 26 basic yoga postures, each performed twice.

The practice of kundalini yoga features constantly moving, invigorating poses. The fluidity of the practice is intended to release the kundalini (serpent) energy in your body. Weren't aware you had any? Well, just think of it as an energy supply, coiled like a sleeping snake at the base of the spine, waiting to be tapped; the practice aims to do just that — awaken and pulse the stuff upward through the body.

Wake up and get on the yoga mat

Get up before the chaos begins and take some time just for yourself. Beginning your day with a few rounds of sun salutes adding on each week and see how much better your day kicks off.