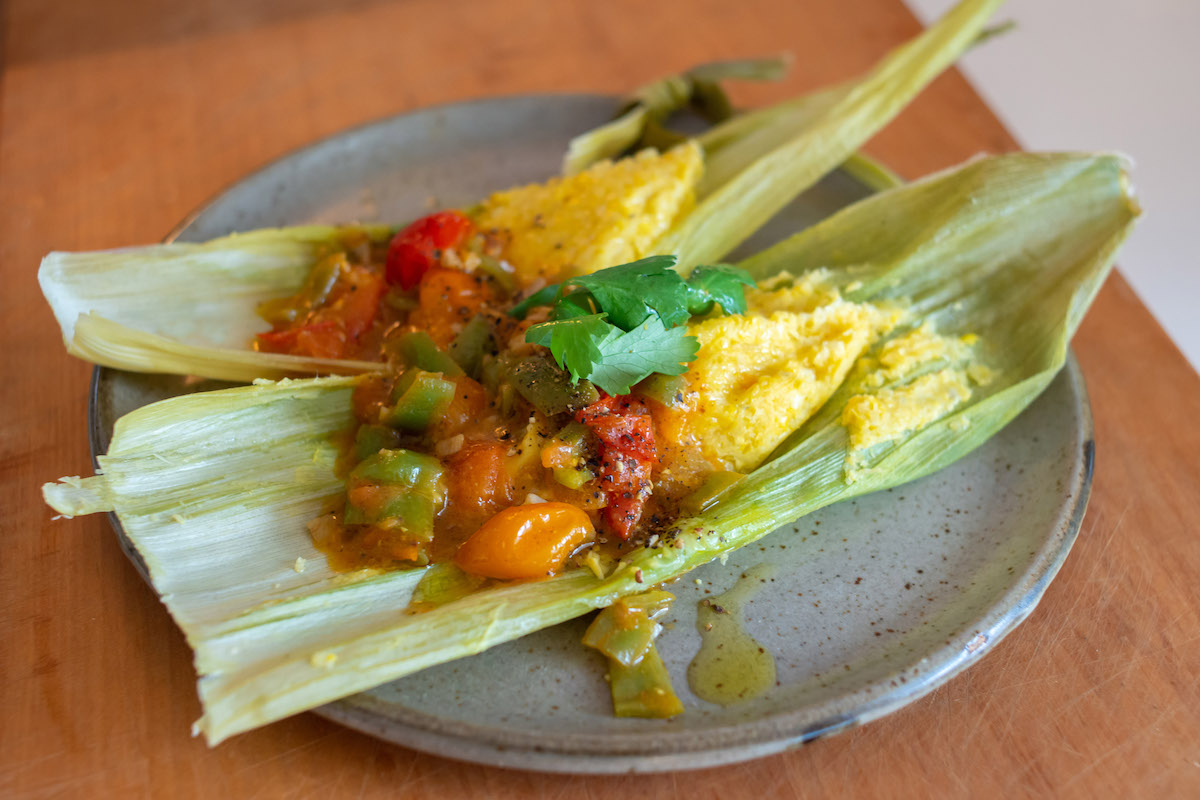 What's extra special about travelling somewhere new is seeing things with fresh eyes. This happened to me in Peru recently with corn. On my first morning the hotel breakfast had a basket of little steaming parcels, a sweet or savoury corn filling inside a corn husk - simple yet totally delicious. Known as a Tamale, this is a favourite snack in much of Latin America. It's usually made from masa flour (maize soaked / cooked in an alkaline solution so will form a dough and to release vitamin B3) and often stuffed with chicken or pork. They can be small snacks to munch as you walk around, or bigger meals wrapped in large husks or even banana leaves.

As I ventured out I saw sacks of many different colourful corn varieties in the markets and started to realise that my view of this staple food plant was expanding. I was offered boiled Choclo, a revered local corn with huge white kernels and a rich chewy texture.

This was the first time I'd eaten non-sweet fresh corn, and it struck me that in New Zealand we're so used to what's familiar that we think of it as one word “sweetcorn”. Then I came across “chicha morada” a sweet drink made from a deep purple corn, with cinnamon and cloves added. Turns out it's as quintessentially Peruvian as Pisco Sour, the famous cocktail.

After a few weeks I began to appreciate how deeply people in Peru care about corn. It's part of their culture and helps connect them to Pachamama (Mother Nature). Everywhere I went I saw fields of it growing in mountain valleys and could only wonder which of the hundreds of varieties it might be.

I ate a lot of tamales but it was the ones I had on that first morning that inspired this recipe. They had a fresh taste and it occurred to me that we could make similar ones here by bringing two cultures together, combining our sweetcorn with polenta - a dried savoury yellow corn similar to what I saw in the markets in Peru. I find making them a beautiful process, carefully peeling the husks off sweetcorn so they can be used as sustainable wrappers rather than seeing them as an annoyance as I often did in the past. I've kept the filling simple so you really taste the corn, and have paired it with a sauce made from sweet cherry tomatoes and green peppers. This is a dish to celebrate in season, once the corn finishes we can look forward to it again next year!

For the tamales, carefully remove the husks from 4 cobs of fresh sweetcorn. Keep the best ones as wrappers and tear less ideal ones into strips to tie the tops with.

Next, cut the kernels from the corn. I do this over a big bowl to avoid strays going everywhere. Place in food processor with polenta and salt, then blend about 20 seconds till corn forms rough paste. No need to over-process, a bit of texture is nice.

Place a heaped spoonful of corn mush into a husk, just above an imaginary center line. Tuck the sides in to surround the filling then fold the bottom of the husk upwards to make a package. Use one of your prepared strips of husk to tie a double knot around the top.

When all tamales are wrapped and tied, steam them for 20 minutes to cook.

For the sauce, heat olive oil in a pan then add the garlic and a few seconds later the green capsicum (and chilli if using). Cook for a minute or two to soften the capsicum. Add the tomatoes, pepper and salt and simmer for 10 minutes till tomatoes have softened and broken down into a sauce.

Serve by opening the tamales and placing a spoon of sauce on each one, with a drizzle of olive oil and a dash of black pepper.

Aaron Brunet won Masterchef NZ in 2013 and now writes, cooks and spreads the word about loving food that loves us back. Visit his website, or follow him on instagram to find out more about a plant-powered lifestyle.